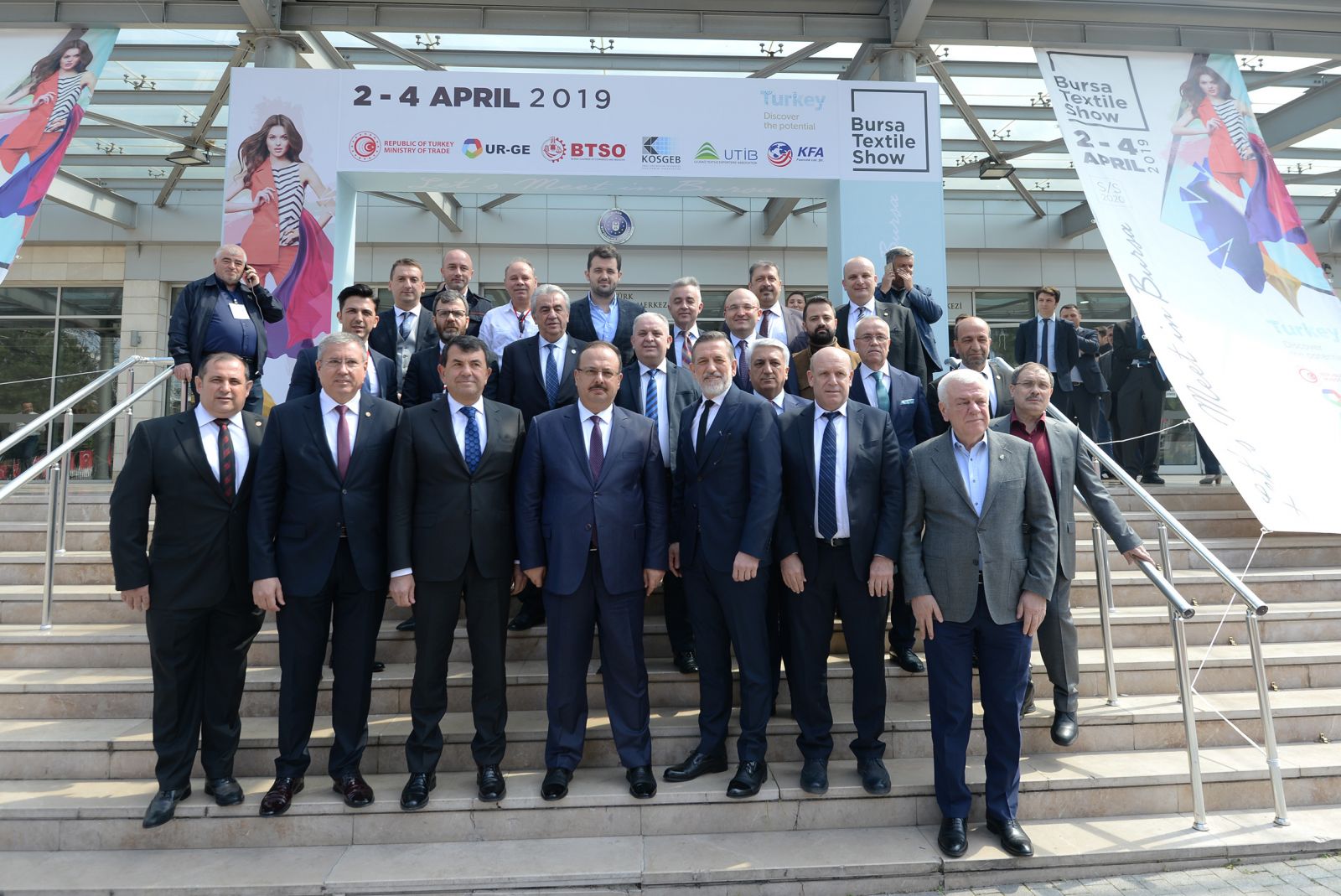 Bursa Textile Show Exhibition which is organized for the 2nd time under the leadership of Bursa Chamber of Commerce and Industry (BTSO) opened its gates. 400 business professionals from almost 40 countries will have bilateral business meetings at the exhibition which will host its visitors at Merinos Atatürk Congress Culture Center until Thursday, the 4th of April.

Bursa one of the leader cities of Turkey in the textile sector is hosting an important organization which will strengthen the foreign trade volume of the sector. Bursa Textile Show Exhibition which is organized under the leadership of BTSO and with the supports of the Ministry of Commerce and Uludag Textile Exporters’ Association opened its gates at Merinos Atatürk Congress Culture Center. Governor of Bursa Yakup Canbolat, Mayor of Bursa Alinur Aktaş, BTSO’s President of the Board of Directors İbrahim Burkay, BTSO’s President of the Assembly Ali Uğur, Yıldırım Mayor Oktay Yılmaz, President of Uludag Textile Exporters’ Association (UTIB) Pınar Taşdelen Engin, BTSO’s members of the Board of Directors and the Assembly joined the opening ceremony of the exhibition.  Almost 90 firms from Bursa opened stands at Bursa Textile Show, exhibiting their 2020 spring/summer fabric and accessories collection.

“THE EXHIBITION WILL STRENGTHEN FOREIGN TRADE”

BTSO’s President of the Board of Directors İbrahim Burkay stated that they united important buyers with the representatives of the sector at the exhibition which is organized within the scope of two different Production – Development projects targeted at the textile sector with the motto of “Let’s Meet in Bursa”. Burkay, underlined that 400 business professionals from almost 40 countries joined the exhibition which brought together dynamics of the sector in Bursa, a.k.a. the textile brand city of Turkey. He also added that the exhibition brought dynamism to the foreign trade of the firms. President Burkay wished for the exhibition which was organized as a procurement committee program before within the framework of Product – Development projects and which gained the identity of an exhibition last year to bring good fortune to Bursa.  He also added: “Bursa Textile Show will continue to play a big role in helping Bursa textile sector, which has an export-focused vision, reach its goals. Bursa Textile Show has become an important platform where textile capital Bursa’s quality in production and design is exhibited.”
President Burkay also mentioned that: “We will continue our organizations which will improve the competitiveness of our firms in line with the demands of our representatives of the business world. We will keep contributing to the export-focused growth movement of our country as Bursa business world.”

“EXHIBITIONS ARE AS IMPORTANT AS PRODUCING HIGH QUALITY PRODUCTS”

Governor of Bursa Yakup Canbolat expressed that Bursa, which is one of the most important textile and trade centers of the world, was one of the top players of the world’s textile league. He said: “Textile is an ancient experience for Bursa which is rooted in its history. It is not enough to just produce high-quality products and gain a competitive leverage. Works focused on improving the prestige of companies for marketing and promotional purposes have become mandatory. At the exhibitions, firms get a chance to promote their products and even more importantly their brands; they also enable new expansions for the economy with activities targeted at creating new job opportunities. I wish for our exhibition to bring good success for our city.”

“CONGRATULATIONS TO BTSO”
Mayor of Bursa Alinur Aktaş said that, he believed the exhibition in which 350 business people from 50 countries participated and 5,000 business interviews took place last year, would strengthen the textile sector this year, too. He also added: “The works of BTSO which bring value to the economy of Bursa is a great advantage for our city. I congratulate BTSO’s President of the Board of Directors Dear Mr. İbrahim Burkay and his team for their valuable works.”

“WE ARE A SECTOR ENABLING ONE MILLION JOB PLACEMENTS”
President of Uludag Textile Exporters’ Association Pınar Taşdelen Engin remarked that they had completed the year of 2018 with 168 billion dollars of exportation as a country; and that textile exportation had increased by 5% reaching 8,5 billion dollars. Engin pointed out that the textile sector was a giant sector enabling 1 million job placements including the producers and the exporters for the economy of Turkey. Engin underlined that they had a mentality which didn’t focus on one market only, but which accepted the entire world as a market. And she added: “We need to evaluate very well the fact that textile is a sector which is always open for design and innovations as one of the strongest features of the sector. At Bursa Textile Show which is organized for the 2nd time with the cooperation of the Ministry of Defense, BTSO and UTIB, we are bringing together 400 foreign buyers and exporters. Despite the difficulties experienced in the global economy and the political conjuncture of the world, we will continue our successful works non-stop to embrace the opportunities.”
After the opening speeches, protocol members visited the companies which opened stands at the exhibition and the “Trend Field” prepared within the framework of the organization. The exhibition which is held at Merinos Atatürk Congress Culture Center will continue until 4th of April, Thursday evening.
↑
Bu internet sitesinde, site hizmetlerinin geliştirilmesi ve işlevselliğinin artırılması gibi amaçlarla çerezler kullanılmaktadır.
Çerezler hakkında daha detaylı bilgi almak, çerezleri yönetmek ve/veya çerezleri devre dışı bırakmak için lütfen Gizlilik ve Çerez Politikası’nı inceleyeniz.
Understood
E-Bülten Kayıt talebiniz tarafımıza ulaştı, teşekkürler.